In the postwar years of the 1940's and 1950's, a “cigarette lighter" meant a metal oil lighter. This page introduces the vintage metal oil lighters SAROME manufactured before it started making gas lighters. 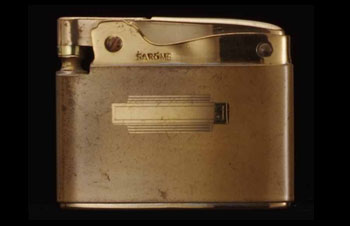 Produced from 1951 to 1955
One of the very first products from SAROME, produced at about the same time as ROBIN. The bottom of the body was engraved with an identifier: "SAROME SWALLOW S.G.W MFG. CO. EXCELLENT AUTOMATIC LIGHTER." The ignition system was the Adonis type.
Two types of SWALLOW were available, the large model and small model. The small one was manufactured first.
The “SWALLOW” name was only engraved on the large model. The small model was engraved with "SAROME" in a Gothic font not used for other products.
A table lighter model attached to an antimony ornament was also available. No "SWALLOW" name was engraved on this model.

Produced from 1951 to 1955
"SAROME ROBIN EXCELLENT AUTOMATIC LIGHTER S.G.W MFG. CO." was engraved along the bottom of the body. There were two type of ROBIN available, the large model (manufactured first) and small model. The large model was engraved with the year in place of the "ROBIN " name. ROBIN was crafted with a tin plate, and also a brass plate, a new feature at that time.
This model was one of Sarome’s very first products, together with SWALLOW. The market welcomed it as an authentic, fully functional cigarette lighter. 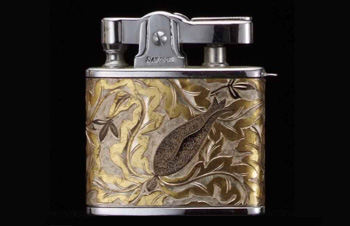 Produced from 1954 to 1956
"SAROME ELEGANCE" was engraved on the front face. The ignition system was the Adonis type. The model design was fashioned after a monochrome television, an appliance gaining in popularity at the time. It looked like a television set turned upside down. A large model and small model were available, the former of which was older. The leather, electrotyping, shellwork, and other surface treatments used for ELEGANCE are all still in use now. 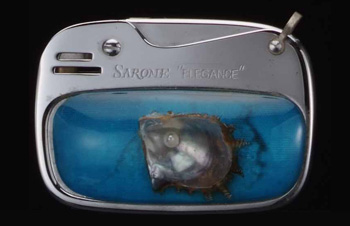 Cigarette lighters at that time were usually manufactured by bonding the main body (tank) with upper and lower parts, like SWALLOW and ROBIN.
Yet this model, ELEGANCE, was manufactured by soldering the main body (tank) and other parts as two halves. The soldered joint surface was polished carefully by hand. To allow the application of decorative materials to the body surface, concave sections were pressed in with intricate precision. ELEGANCE was shipped not only in Japan but also overseas. It is highly acclaimed as one of SAROME's masterworks from its early days.

Produced in around 1955
“LISER” is derived from the name of the mother of SAROME’s founder, Kunijiro Segawa.
Thanks to the success of ELEGANCE, the factory ramped up to full production. Less swamped than his employees in the factory, founder Kunijiro had time to design and manufacture LISER partly for fun. LISER was a labor of love, of sorts, and rarely produced commercially. 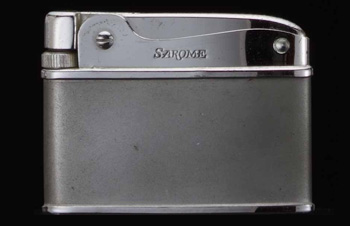 Produced in around 1955
SEGAR is a play on the last name of the SAROME founder, Kunijiro Segawa.
Thanks to the success of ELEGANCE, the factory ramped up to full production. Less swamped than his employees in the factory, founder Kunijiro had time to design and manufacture SEGAR partly for fun, along with LISER.
SEGAR was rarely produced commercially. 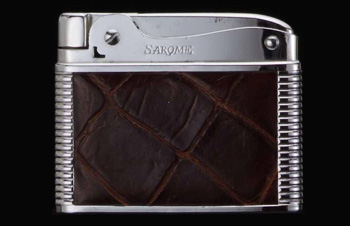 Produced in around 1955
"SAROME FALCON EXCELLENT AUTOMATIC LIGHTER S.G. W CO." was engraved along the bottom of the body. This model was a precursor to three future series: OSCAR, UNICORN, and SHARP. 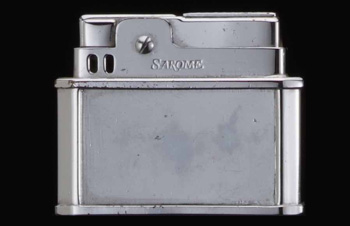 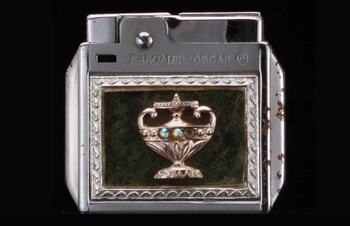 Produced in around 1957
Engraved with the "UNICORN" name.
UNICORN is similar in design to FALCON and OSCAR, so we group all three in the same series. UNICORN was the only of these models to use the slide-type ignition system. Together with FALCON and OSCAR, it helped established the SAROME brand image in Europe. 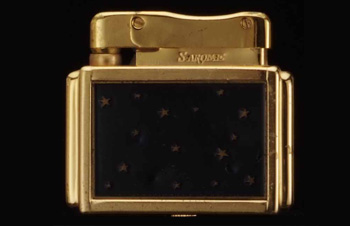 Produced from 1958 to 1959
Prospering from the success of OSCAR and other models, Kunijiro found time to indulge his hobby as a craftsman and modify the design of LISER. He downsized the body and attached a strap. PET is probably the first compact cigarette lighter designed for woman smokers in the history of smoking supplies. 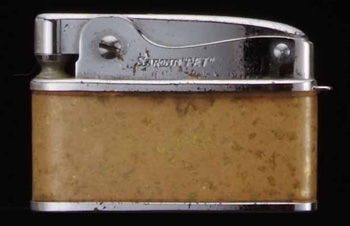 Produced in around 1958
This model was a large-size version of OSCAR, a hot-selling product at the time. 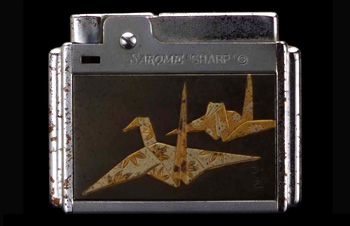 Produced from 1959 to 1960
The world’s first non-cotton oil lighter, known at its time for a line of ad copy: "Fill up the tank once, and travel around the world without a refill."
In a normal oil lighter, a cotton sponge soaked with fuel oil is set inside a tank. LIQUID needed no cotton sponge. Its oil fuel tank was sealed with metal only.
As an oil lighter, LIQUID was a technical basis for the production and development of SAROME's next series of gas lighters. 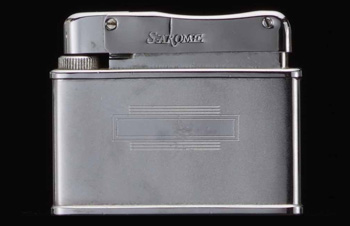 Produced from 1959 to 1960
The typical VINTAGE SAROME cigarette lighter. Kunijiro, originally a producer of high-class toys, manufactured several of his cigarette lighters for fun. This model was one such lighter, manufactured in the motif of a cruiser.
Only one other model at the time was designed with equal whimsy, the camera design model. CRUISER was received with delighted surprise as soon as it hit the market. Many units were shipped outside of Japan, especially to the USA. 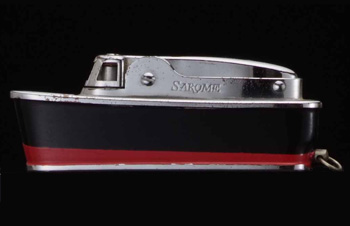